Cordage and Accessories for Survival and Outdoors

Long
before celebrated Canadian bushcraft and survival expert Mors
Kochanski dedicated a chapter of his famous book Northern Bushcraft to the topic of ‘bindcraft’ and before
Dave Canterbury’s concept of five C’s of survivability became popular Stone Age
hunter gatherers were creating cordage from the bark of willow and basswoods,
grasses and animal skins.

Strong
cord is vital for so many day to day tasks, and
even more so in a survival situation, nowadays we don’t have to rely on natural
materials for cord if we need to we can split it
down from larger ropes, improvise it from seat belts, straps, belts, shoe laces
or duck tape. It doesn’t matter as long as you have something to pitch a tarp
shelter, make bow drill strings or improvise traps.  Cord has a host of
uses beyond just tying knots, jute twine can be shredded down to its
constituent fibres and used for fire lighting, it can also be used to make a
wick for an improvised lamp or candle, lamp wick was traditionally used to make
the bindings of old fashioned home made snow shoes.

Being able to make our own cord from
natural materials is a great skill and a useful ability for those who spend a
lot of time outdoors or in preparation for a survival situation.

Figure
1 Lime and elm logs stripped of their bark which is rolled up ready
for processing into strong cordage.

The easiest way to get plenty of basswood
bark is to fell a large ‘sucker’, the trees send up shoots or suckers from the
base of a mature tree and these can get quite large, if you can fell one that
is wrist thick or even larger and as long as you can find you will get a huge
amount of fibre for cordage making. Once you have felled it you can strip the
bark off using a stick carved to a chisel shape at one end and it should come
off in one piece.

Once the bark has been removed it needs
to be allowed to ‘rett’ or ferment in water, this process rots away some of the
plant fibres leaving only the fine flexible fibre that we want to use for our
cordage. Ideally this water should be running but a large trough is an
acceptable substitute.

Once retted the inner bark can be
stripped from the outer bark and dried ready for future use. If you are careful
some of these strips can be as long at the sucker they were cut from and the
longer the individual fibres the stronger your cord will be as you will have to
do less splicing and joining. 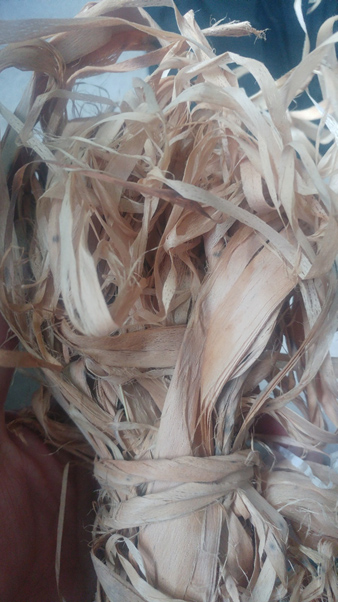 Your two main options for turning your processed fibres
into cord is plaiting or reverse wrapping, reverse wrapping is the better
option for plant fibres in my opinion. Reverse wrapping takes a little getting
used to but produces an excellent cord that will look just like the kind you
might buy in the shops and which will not fray when cut. To reverse wrap your
fibres into cordage you will need to find the middle of a bundle of fibres,
take the bundle between the thumb and finger of each hand and twist in opposite
directions until the fibres kink and form a loop. This loop is going to be one
end of your cord. From there on you will hold the twisted portion of the fibres
to keep them still and then with your other hand you will twist the upper
bundle of fibres between your thumb and index finger until is tightly twisted
and then take the lower bundle of fibres behind the first so that it is now
uppermost, repeat the process.

One thing that’s for sure is its more rustic than paracord but it
will never be as strong or versatile so never be caught unprepared without it
even if you do have the skills to make your own cord. To make sure you always
have the cord you need make sure you pack genuine paracord into your survival
kit and bug out bag. Never head out on an expedition in the wilderness without
a store of paracord, genuine military
specification cord contains multiple inner stands which can be gutted
from the nylon sheath and used for smaller tasks such as improvised fishing
line or thread for carrying out repairs to your clothing and equipment. To make
sure you always have some on you could consider wearing a paracord bracelet. Having
one of these on your person gives you several feet of paracord at your disposal
at all times. These can also be equipped with compasses or other
useful survival items and can be a great addition to your ‘edc’ (every day
carry) system.

One final thing to remember when it comes to
cordage in the outdoors, you always have boot laces and while they are useful
for keeping your shoes on don’t underestimate their value as improvised cordage
in a survival situation.

Source
Cordage and Accessories for Survival and Outdoors is written by for www.dnatactical.com

Tags: Cordage and Accessories for Survival and Outdoors | BlogDNA Tactical - We stand behind every product we carry.

How to Choose A Hand-Held Light

How to Choose a Hands-Free Light

Cordage and Accessories for Survival and Outdoors